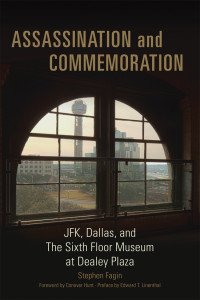 Stephen Fagin’s newest work is the perfect selection for our group to study the 50th Anniversary of the JFK Assassination in Dallas on November 22, 1963.  Fagin, the Associate Curator and Oral Historian at The Sixth Floor Museum at Dealey Plaza, offers a uniquely refined perspective about the assassination, Dallas and the museum.

Here is a great description of the book:

The shots that killed President John F. Kennedy in November 1963 were fired from the sixth floor of a nondescript warehouse at the edge of Dealey Plaza in downtown Dallas.  That floor in the Texas School Book Depository became a museum exhibit in 1989 and was designated part of a National Historic Landmark District in 1993.  The book recounts the slow and painful process by which a city and a nation came to terms with its collective memory of the assassination and its aftermath.

Here is a link to a promotional video about the book on the Museum’s You Tube channel.  Enjoy!

Y’all need to read this great book!!!!  Sandy See, Publicity Manager at the University of Oklahoma Press, was kind enough to donate 5 free copies of the book!  We’ve already given away one book – so there are 4 more copies left!!!!!

I think you will all agree that this book is a perfect choice for us!

2 Responses to Our next title will be……..

RT @tj_mayes_ Prepping for a 2nd day of interviews for a hour-long @klrn “On the Record” special episode about #BlackLivesMatter. Tonight at 7:00 📺. Here is the intro I wrote (we ended up using another): pic.twitter.com/z6RpeDZKJZ

RT @ttupublicmedia Local #Lubbock restaurant, Royal Indian, closed its doors for good on Friday. The economic hit that came from the pandemic was too much for them to withstand. Listen to the full story radio.kttz.org/post/royal-ind… pic.twitter.com/wnxKc5oCMw

RT @PBSKIDS Join author and illustrator @theartoffunnews for a reading of his new book, “You Matter.” It’s all about seeing the world from different points of view. Watch the premiere on the PBS KIDS Facebook page and YouTube Channel on Friday, June 5 at 12 p.m. ET! pic.twitter.com/TPCjW9xK2p

RT @pbsteachers Teachers, encourage your students to use their journalism skills and share their voices in this moment. (Grades 8-12) to.pbs.org/2z3PLGA